Turn any surface into a touchscreen with Xperia Touch:

Unlike traditional projectors, Xperia Touch does more than put on a show. It turns a flat wall, table or even your floor into an interactive screen. With short-throw projection, Wi-Fi connection and state-of-the art touch functionality, this portable projector adds a whole new dimension to your home. It uses an Android technology. 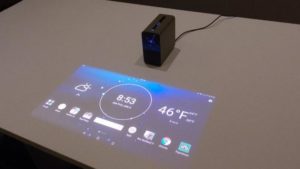 It’s still in its experimental phase and Sony hopes it will act as a digital hub for families. The device can turn any surface into a touchpad and project calendar events, real time weather data and a memo board too. The interface also has Skype inbuilt for video chat , users can also browse the web, watch tv, download apps from the Play Store and even connect to the PS4.  It’s sensors use Sony’s SXRD projection display technology and detects users’ gestures and taps using a combination of infrared sensors and a regular 60 fps camera.